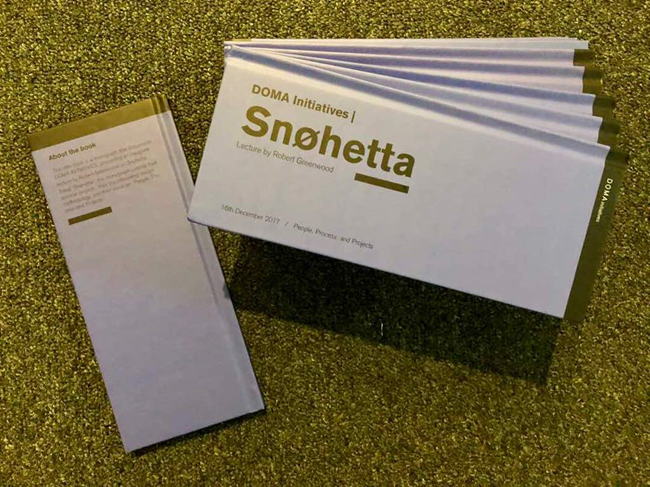 The little book is a collection of lectures transcribed from the DOMA INITIATIVES.

It draws inspiration from the Yellow Book on Tezuka Architects. DOMA INITIATIVES is a non-profit programme that also seeks to create other architectural initiatives such as workshops, symposia, exhibitions and publications to promote excellence in architecture and de- sign. DOMA INITIATIVES and its affiliate partner Taylor’s University School of Architecture, Building and Design and consonant industry supporters aspire to inspire new ways of thinking about architecture to champion the power of architecture to transform lives and improve the places where we live and work to benefit everyone.

This little book marks an important milestone for DOMA INITIATIVES, with Robert Greenwood, from Snøhetta, a practice based in Oslo, Norway, to deliver the inaugural lecture on the salient projects and the transdisciplinary approach of Snøhetta. Snøhetta (Norwegian pronunciation: [‘snø:,heta]) began as a collaborative architectural and landscape workshop, and has remained true to its transdisciplinary way of thinking since its inception.

While every effort was made to preserve the intent of the lecture and the Q&A, a number of editorial decisions were made to a tone of more formal writing. The little book would not have been possible without the support of the advisory panel comprising of Fay Cheah, Ar. David Chan, Kamil Merican and Tony Liew. We would also like to express our greatest thanks to our supporters - the Aga Khan Award for Architecture, GDP Architects, Web Structures, and Taylor’s University School of Architecture, Building and Design, and industry supporters, Swissma, Grohe and American Standard.